The purpose of the Tulalip Stock Assessment Laboratory (TSAL) is to collect and analyze stock assessment samples and data from juvenile and adult salmon and steelhead from regional fisheries, hatcheries, streams, and their habitats, in order to responsibly co-manage natural resources under the tribe’s jurisdiction as mandated under existing treaties, court orders, and terms and conditions of permits and management plans.

Because today’s hatchery operators must monitor hatchery fish after release and their potential for genetic and ecological interactions with juvenile and adult wild fish, a number of different types of marks and tags are given to the Tribe’s hatchery fish before juvenile fish are released. First, all (100%) of the Chinook, coho, and chum salmon raised by the Tribe are uniquely marked by hatchery of origin and brood year when they are tiny eggs by changing the water temperature in particular sequence that can be identified later in set patterns in their “otoliths”, which are sometimes called earbones. Otoliths are stones that form daily rings inside the fish’s head, resembling the annual growth rings in trees. Temperature changes form marks on the otolith rings similar to bar codes that can later be read in our lab. Small rubbery adipose fins near the tail are removed from approximately 2 million salmon originating from the Tulalip hatchery annually. An additional 250,000 of the tribe's juvenile Chinook and Coho hatchery production are marked with small metal "coded-wire" tags inserted into the snouts before they are released. These tags can be identified later using metal detectors.

After release, the Tribe conducts an extensive sampling program to recover thousands of these marks, tags and tissue samples from juveniles in regional streams, estuaries, and the marine areas of Puget Sound and later, when they return as adults, from regional fisheries, hatcheries, and rivers. The fin clips help to identify them as hatchery fish while they are still alive in fisheries so that the clipped hatchery fish can be kept in mark selective fisheries, while the unclipped wild fish can be released. The coded-wire tags, along with the otoliths, are sampled at the docks to estimate the stock composition in the fisheries, which enables the tribe to continue to demonstrate that their fisheries in Tulalip Bay are principally targeting the hatchery production with very little impact on wild stocks. A combination of otoliths, tags, and clips recovered from the adult spawners in regional rivers and hatcheries demonstrates the contribution of Tulalip Hatchery fish that stray to other hatcheries or to local spawning grounds such as the Snohomish basin. Scales are collected to identify the ages of wild and hatchery fish as well as to determine how long they lived in rivers and in the ocean, while other tissue samples are collected to identify their genetic composition to determine what populations the wild fish are from or to estimate gene flow between wild and hatchery fish. 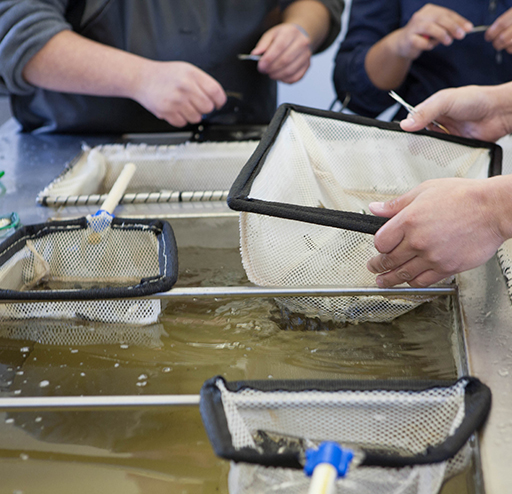