In the fall of 2015 the Tulalip Board of Directors adopted a policy to create a strategy to increase our resiliency in the face of these changes by developing a climate adaptation plan. The plan is intended to maintain the health and well-being of Tulalip people and culture in spite of the adverse effects of climate change. This plan considers the risks to, and strategies for, protecting health, economy, natural and cultural resources as well as infrastructure.

A key assumption in thinking about and applying adaptation measures is that we adapt throughout our daily routines. This climate adaptation planning efforts is simply a more deliberate consideration of climate change in how and why we adapt.

In 2016 we convened a group of Tulalip staff from a variety of departments to act as a core team to develop this strategy. The Team then reached out to others in Tribal Government for broad input. The Team identified the many facets of tribal life that are affected by climate change. To efficiently develop and apply adaptation strategies we associated climate change threats to areas of tribal interest such as discrete geographic areas, government functions, specific natural resources, health and the economy.

Five geographic areas were defined based on the effect of climate on the land or water:

Tribal Government departments carry out the functions of government by providing services to members, maintaining infrastructure and protecting tribal resources. Many of these functions are affected by climate change, so these departments have had to adapt. They include Public Works (road, fleet…), Administration (building maintenance and management), Natural and Cultural Resources (natural resource management and cultural resource rediscovery) and healthcare delivery services (multiple departments). We have set out to work with Tulalip Tribal practitioners in all of these areas to develop tailored plans for adjusting to the relevant effects of climate change.

There are areas where we don’t understand the nature of change enough to adapt. In those cases we need to research and observe so we can develop effective adaptation measures. The team has, so far, acquired funding and started three projects that will help us to better understand how to adapt to climate change.

One other project specifically directed at the effects of climate change is being planned. As mentioned above the Quil Ceda watershed will certainly suffer greater flooding. We intend to apply for grants to help us update our tribal hazard mitigation plan so that the effects of climate change are considered in flood forecasting and flood mitigation. As we learn more and if resources are available we will expand these investigations.

Other proposals will not address climate change as a primary purpose but will include it as one aspect. For example a recently developed grant proposal to address invasive species that affect tribal resources includes a section on how various climate scenarios may facilitate the invasion and expansion of harmful invasive species. Other projects will also include consideration of climate change as appropriate.

The reality of Tulalip climate adaptation is that we have been adjusting to climate change for a long time. All of our current work, whether in health care, building maintenance, economic development, emergency response or natural resource management, has required that we adjust to changes around us. The Board of Directors mandated plan is identifying climate adaptation that is already happening and looking into the future for adjustments we will need to protect our wellbeing in light of projected change.

Climate adaptation is itself an ongoing and adaptive process. It is not an effort that is separate from our day to day lives. It is an accounting of and adjusting to the environmental factors affecting us. It modifies our day to day activities, including lifeways, work and tribal governance. For example, we manage wildlife throughout our tribal territory. We are not likely to change our fundamental approach to management but climate adaptation planning will allow us to adjust our management decisions to account for anticipated changes attributable to climate change. This is the case throughout Tribal activities.

A short list of public reports and documents for Tulalip and our region. 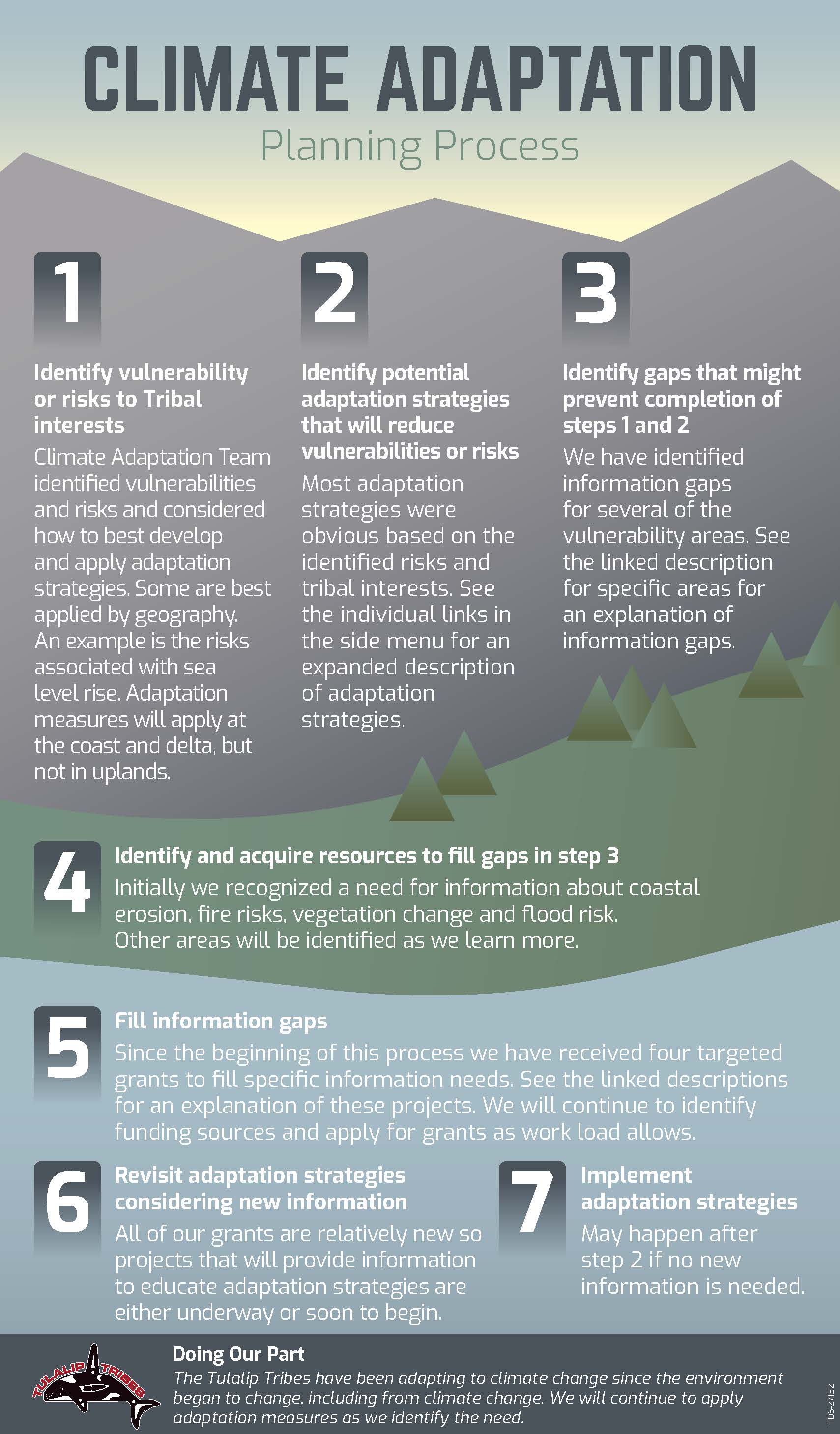